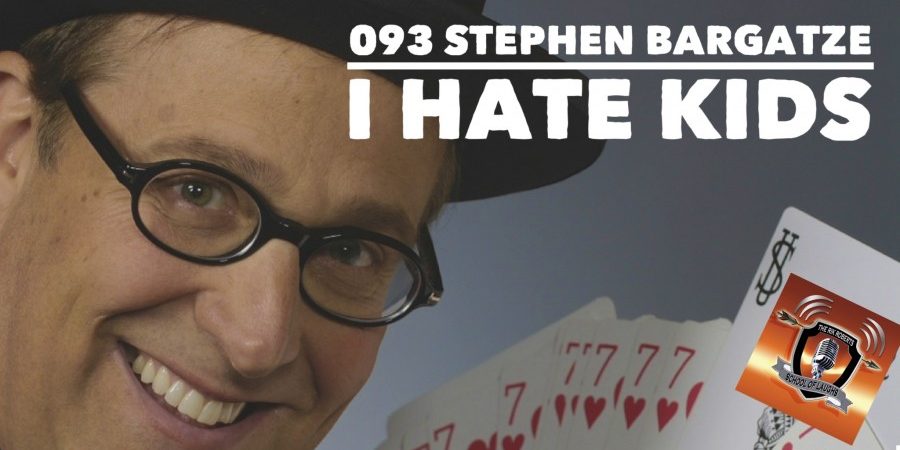 Stephen Bargatze joins us today. If that name sounds familiar it may be because you saw him in Las Vegas, caught him at Opryland, perhaps he visited your school or maybe because he is the father of Nate Bargatze.

Regardless of whether you knew him before or not, you will love his generous and insightful interview.

Stephen ran away from home in his teens, escaping an alcoholic father and other family issues. After being bit by a dog he was left with a bit of a lisp that also forced him into a bit of shyness. A few chance encounters reshaped his entire life and he headed off in a much better direction.

With encouragement from a clown – yes, a clown, Stephen began to learn magic and perform shows. Later on he left the makeup behind and let his comedy and magic stand on its own.

Today he shares with us his story and some great insights into the world of magic. We cover many things, including…

You’ve got to listen to Stephen Bargatze describe some of his tricks and hear for yourself. You’ll quickly learn why he has been able to spend decades doing what he really loves.

For a primer, check out this video clip with Dick Butkus called the “Straight Jacket of Death.”

Or visit his web site: MagicofStephen.com

You can contact us anytime in regards to these announcements at schooloflaughs@gmail.com .

Do you have something you’ like to promote? A new CD, big show, or your very own podcast? Contact us for sponsorship options. You can promote on one or multiple episodes.

We want to help as many comics as possible. If you have a short joke (100 words or less) that you would like some feedback on please send it in! You can email the joke written out or send us an audio clip, or even a link to a YouTube video. We will get it on the show and get feedback for you, give out your web site and / or twitter handle to help you get your name out there. Our show is PG so please take that into consideration when selecting a joke.