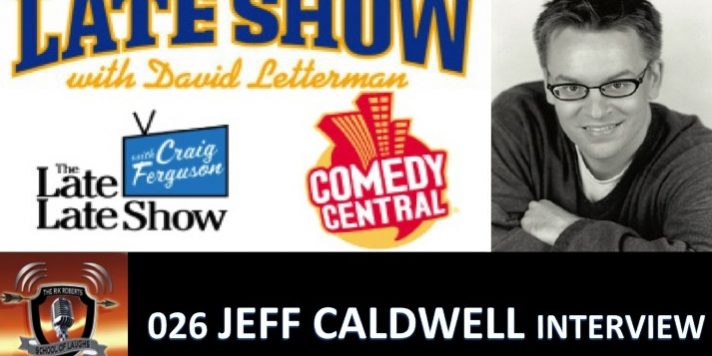 Six time Letterman veteran Jeff Caldwell is a prime example of what a comedian should be. He’s smart, insightful, observational, opinionated, and clever. On top of that, he’s clean (unless a brawl is about to break out).

Whether at a comedy club or a corporate event, Jeff delivers smart, funny jokes on topics ranging from the daily news to the daily grind, subtly tailoring his material to fit any crowd. Along with his six Letterman sets, he has made three appearances on The Late Late Show with Craig Ferguson and made his Comedy Central debut on Live at Gotham. Jeff has appeared with Keith Olbermann, Dennis Miller, on SiriusXM Radio, toured with Jon Stewart, and is a regular on the nationally syndicated Bob and Tom radio show.

A former civil and environmental engineer, he also blogs at the Huffington Post, commenting humorously on scientific topics affecting the world today.

This interview was recorded in between shows at Comedy Off Broadway in Lexington, KY over the Thanksgiving holidays.

After you listen, get to know Jeff even more …

If you enjoy this PODCAST please subscribe in iTunes or STITCHER and leave a comment and ranking.
Better yet, subscribe to the bi-monthly School of Laughs “Insider Tips” email and get exclusive information delivered right to your inbox. It’s fast, free useful and fun. Email: SchoolOfLaughs@gmail.com and put “insider tip sheet” in the subject header. I’ll make sure you get the official tip sheet and I promise to keep your email anonymous and spam free.
@SCHOOLOFLAUGHS  on Twitter
By RikDecember 26, 2014Leave a comment
Tags: Comedian Jeff CaldwellComics frm oLettermancomics from LettermanI'm no epidemiologistJeff Caldwell ComedianLate Show with David Letterman comediansLetterman Comediansrik roberts podcastSchool of Laughs Podcast
Share this post
Share on FacebookShare on Facebook TweetShare on Twitter Share on LinkedInShare on LinkedIn