Should a Host do Crowd Work? 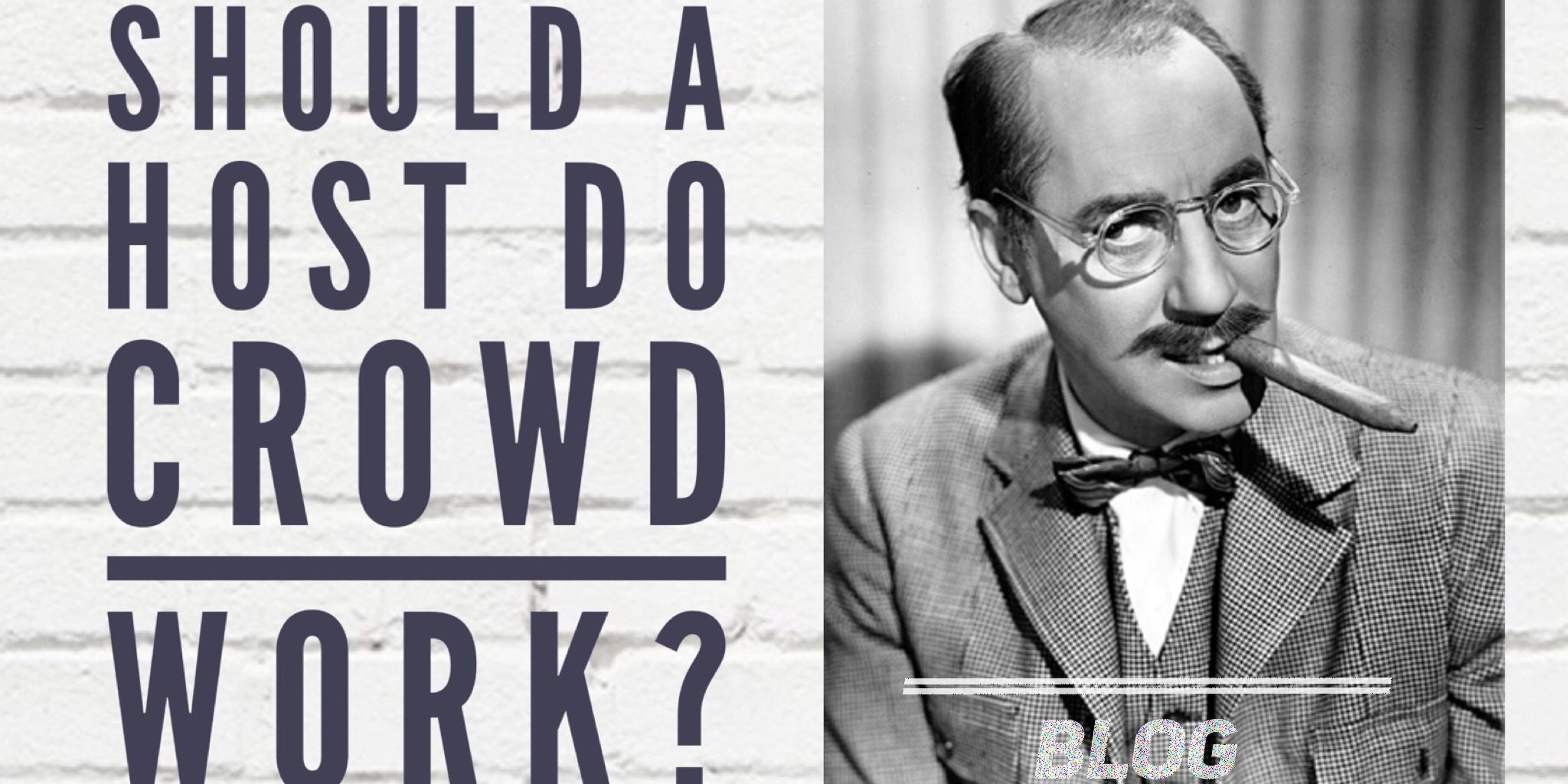 This question was asked as a follow up to the post on hosting tips last week. As with nearly every comedy topic the short answer is, “find what works best for you by experimenting and see how it goes.”

So that’s one answer.

More specifically, I feel the host (or as the English prefer “compere”) should establish control of the room and set the tone for the evening as efficiently as possible. You can begin the show with a few announcements; engage the group by acknowledging birthdays and other celebrations, and then transition into your material.

Some clubs will employ established headliners as a “house emcee” for months at a time. In this case, crowd work helps the performer make every show unique. It also allows them a chance to create new material for when they go back out on the road. The more experienced you are as a performer, the more leeway you have. Headliners should have no problem weaving the crowd work into material and wrapping their set with a few solid jokes. If you are a relatively new comedian, however, I would strongly suggest working on your sets and leaving crowd work to the other performers.

Now, I think the bigger questions are:

I am going to assume you have terrific material. If the crowd simply isn’t responding to your tried and true jokes, then there is a “disconnect”. It may be that the crowd is simply “tough” and you have to step up your hame. Or, it could be that you are going too fast, too slow or just not choosing the right material for the room. If that isn’t the case, the audience simply hasn’t bought into the show – yet. Establishing rapport through crowd work might increase response and allow you to get on with your material.

If the crowd is chatty, crowd work may get them to stop talking to each other and focus on you. By directing a few questions to a specific audience member, you grab the attention of the rest. The dynamic of a conversation where someone is “talked to” tends to draw people in. Conversely, the feeling of being “talked at” can be a turn off.

If the audience is made up of only a handful of people, they sometimes feel too much pressure to laugh at every punch line. So they decide to not laugh at any. They wait for the other couple in the room to respond first. By directing a few questions towards a specific person you “require” them to interact. Just be respectful. Ninety per cent of people identify themselves as being “shy.” If they are unwilling to engage, move on.

AN ISLAND IN A STREAM OF STRANGERS

At one point or another, you’ll have a group within the crowd who all know each other. Most likely it will be an office party, bachelorette party, etc., who have decided to go to the comedy club for on an outing. The rest of the audience is made up of people with no connection to the party. In this situation, sometimes the party group is expecting some individual attention. By quickly acknowledging the large group with a little crowd work you can disarm their need for attention for the rest of the show.

If they interrupt later you can remind them that they had their 15 seconds of fame and now it’s time to shut it down.

Those are just a handful of situations where crowd work can get the show back on track. I still prefer a minimum amount of crowd work in a host. Some reasons why are below.

One downside to crowd work is that it appears to the crowd that you prefer they be part of the show. They will then interrupt at random because of the comfort level you established when talking to them. The quicker you bring the focus to the stage – the faster the show gets on track. If crowd work is all you do as a host, the next comic up will have to establish the rhythm and pacing of the show.

Another downside is that you aren’t developing any material you can really do on TV. This may not be your goal; you may wish just to work at comedy clubs. That’s okay. But realize that as a host your time is limited. So if you want to move up, you should always be working on material that can help you get to the next level.

My mindset is that and audience member pays to see comedians doing material. So get into that material as naturally as you can. Do your thing. If I went to see a comedian and the entire time they bantered with the crowd I’d be truly disappointed. It would be like going to see a band play their hits only to see them talk about their songs and play an occasional riff.

Those are just my opinions (as a performer). And there are some exceptions …

LEFT BEST IN THE HANDS OF THE HEADLINER

Can you do an entire show based on just crowd work? Some of the sharper minds in comedy sure can. Todd Barry just recently released a movie titled “The Crowd Work Tour” where he takes the best conversations from a variety of shows and weaves them into a great recording.

Judah Friedlander is a great comedian who can work the crowd and still make the show flow quite nicely.

Paula Poundstone is another example of someone who can really use their razor sharp wit while working the crowd. In a SanDiego.com article Paula says her crowd work steers back to material,

“I use the crowd as sort of bumpers in my pinball machine act. I’ll be on something with an audience member and then I use that to steer me into a piece of material. Most people have no idea when what is what.”

To be fair, crowd work is a skill you will sometimes need. So yes, you will want to work on it. If you are new, I would advise working it out at open stages and amateur nights where the expectations are a bit different and you are performing for free. Once you get good at it (if you do) it will be one more weapon in your comedy arsenal.

In other words, it’s better to have crowd work as a skill and not need it, than need it and not have it.

Best wishes for great gigs, crowd work or not. 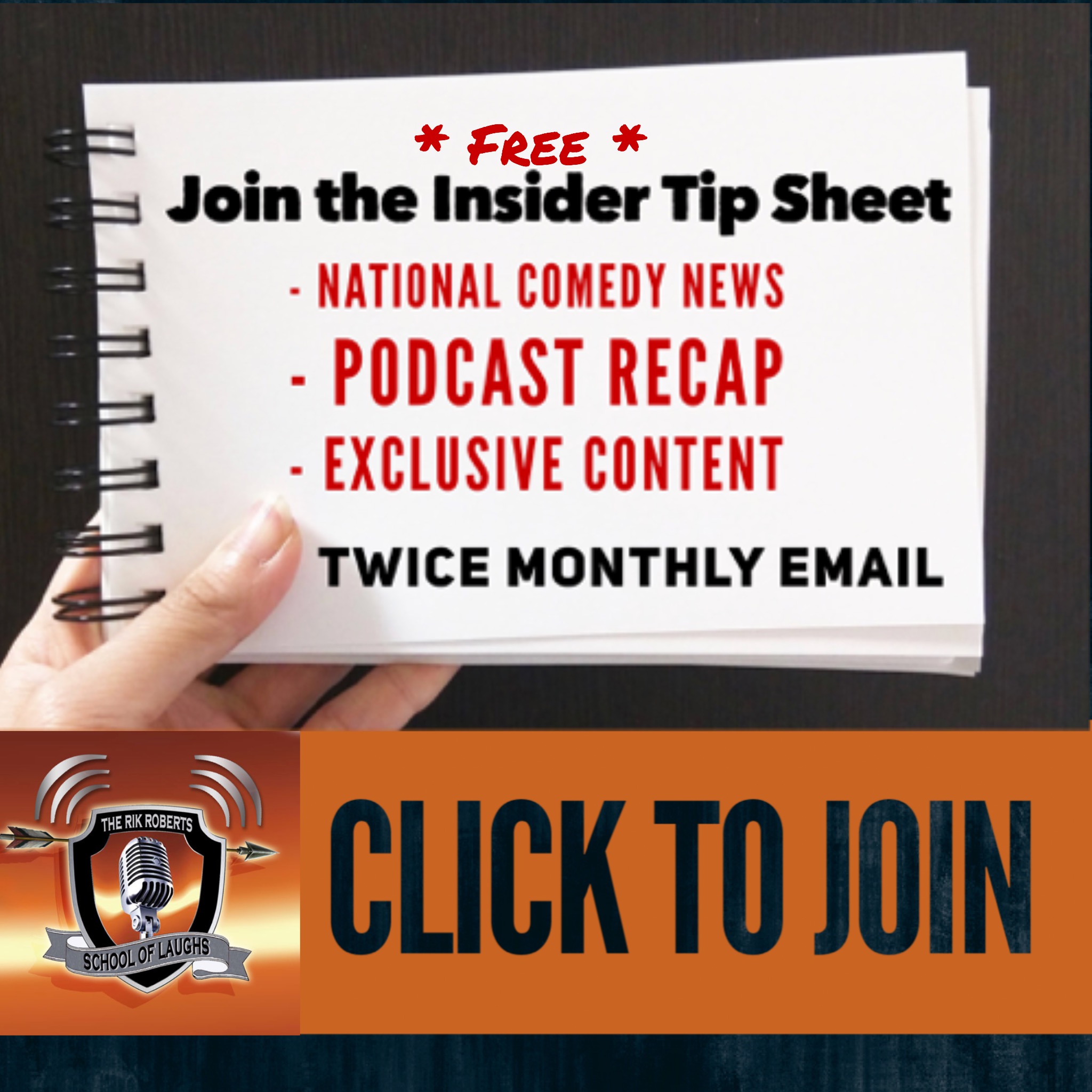 If you feel your writing is holding you back, please consider enrolling in the online writing class. Doing great crowd work won’t help one bit if you aren’t creating solid material. For more info on that click here.