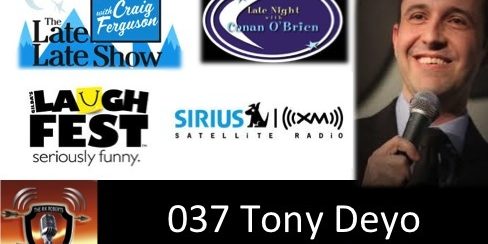 This week, in honor of LaughFest you get two bonus interviews. Last year I was honored to perform in the clean comedy showcase during the festival. It was a blast and I got to work with several great comedians.

The sound quality is a little off since I was recording without stellar producer Gavin Miller. But, they are great comics and both had a lot of insight for beginners and established comedians alike.

Comedian Tony Deyo began his comedy career during a brief stint in Austin while he was also a full-time middle school band instructor. Realizing he would regret not trying to live his dream Tony took a local comedy class that helped him get the courage to get onstage and pursue stand-up comedy.

Now, with an appearance on CONAN under his belt he’s marching his way across the country commanding one stage after another.

If you enjoy this PODCAST please subscribe in iTunes or STITCHER and leave a comment and ranking.