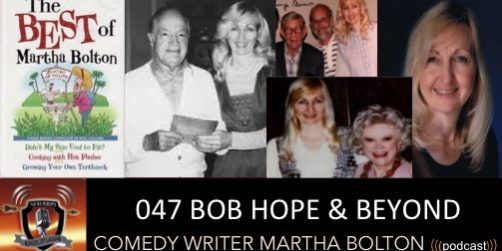 Martha Bolton is a joke-writing machine! As a staff writer for Bob Hope for over fifteen years, Martha developed the comedic muscles to crank out an incredible amount of comedy material. Many others including Phyllis Diller, have hired Martha to produce comedy gold.

In this interview, Martha walks us through the steps of her journey from writing jokes for “roasts” as a church secretary all the way to becoming a poet, lyricist and playwright. As if that isn’t enough, she is also the author of over 88 books!

Every generation listening will gain insight into the many facets of comedy writing. From having to throw out and rewrite an entire set of jokes merely hours before a show, to how the advent of the fax machine changed the way she delivered jokes.

Listen in as we talk about:

To find out more about Martha Bolton …

Watch this video about her work with Bob Hope: https://www.facebook.com/marthaboltonofficial/

This podcast is a production of the Rik Roberts School Of Laughs. If you want to learn about becoming a stand-up comedian, or just become a better one – visit the wwwSchoolOfLaughs.com web site.

If you enjoy this PODCAST please subscribe in iTunes or STITCHER and leave a comment and ranking.