3 Tips For Becoming a Stronger Comedian 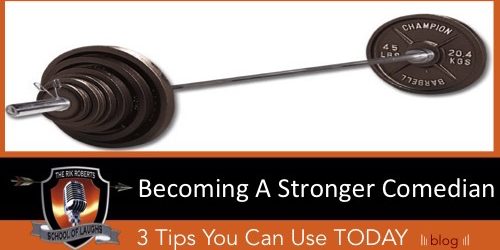 Have you got your act nice and tight and “down to the breath” rehearsed? Are you getting the laughs exactly where you expect to get them? Great. Record the set, release a DVD and get over it.

Whether you are a full time comedian or a true beginner, you must avoid the trappings of a warm and cozy set. Comfort is the enemy of creativity. Should you work a set until it gets super tight and solid? Yes. Should you spend time refining it and working the nuances? Yes. Perform that set at a showcase, on TV, or in an audition. Record it for yourself so you know where the beats are, and how the phrasing goes.

Then put it aside.

You know you have to try new jokes to build your set. But what other things can you do to push yourself and start becoming a stronger comedian onstage? Read on to see how you can make progress by making things a little uncomfortable.

TIP #1 BOLDY GO WHERE YOU HAVE NEVER GONE BEFORE

One way to shake things up is to literally go face your biggest fear. Are you borderline paranoid of a certain group, city or scene? Then book a gig or do some spots and face them head on.

Maybe you are always in clubs but want to test out how clean you can be. Head to a show that has restrictions and put together a set that works there.

Perhaps you are getting older and feel a little apprehensive performing in front of a college crowd. Book a gig or do a few posts in front of them.

On the flip side, you may be 18 and think older crowds are boring or judgmental. Go do a show at an old folk’s home.

Starting to feel invincible? Volunteer to go open for a band in a venue where no one expects a comedian. Win the crowd over. Connect and conquer.

Outdoor gigs, late night gigs, daytime gigs – anywhere that freaks you out is where you need to go to take a few chances. There are many gigs that make you stronger.

By becoming fearless early on, and by making it a habit to perform in the toughest of spots, you will develop material that is bigger and bolder than you currently tell in front of you cozy, reassuring audience.

Maybe you don’t have access to all those decidedly different venues. You can get up in front of your typical audience and take a chance by … leaving out your three absolute best jokes. Yep. Say goodbye to the safety of your best bits and free up some space to work in some new material.

Especially at unpaid gigs or open mics, performing your “signature bits” is a surefire way to stifle your growth as a comic. How can new ideas spout when they don’t have the space to grow?

By leaving out the biggest of laughs you will suddenly start “auditioning” your other jokes to see which one can move into their place. That joke on the verge of becoming a solid staple in your show now gets more focus. You become more versatile by developing those other jokes. Having a few great buts is just a limiting as it is liberating. Having an endless supply of jokes that are just as strong will make you bullet proof on stage.

Have you ever been on stage and watched in amazement as someone totally destroys the audience? You think to yourself, “Glad I don’t have to follow that!” This is a sign that you are afraid to become uncomfortable. You don’t want some one else’s star to blind the audience before your half-moon appears.

Instead of being thankful you don’t have to follow that hot comic, let it be known that you want to always follow them. Suggest to the host of the open mic that “I’m totally fine with you putting me on after someone kills if you like”. They will look at you like you are crazy and secretly hope that this exact scenario plays out. They want to see you fail. Trust me, though, do this enough times and you will find a way to survive and become stronger performer because of it.

Sound like a “no win” situation? Initially it may be. But the patience and deliberate approach to your material you develop by stepping on a hot stage will serve you well as you move up the ranks at a comedy club. Having no fear and experience will give you a leg up on everyone else.

Other places where becoming a “crash test dummy” can prepare you for success are a comedy contest or showcase nights. When the best of the best compete for prizes or attention you can bet that they will be bringing their “A” game. No doubt about it. Again, by having followed a “hot” set at an open mic, you are preparing yourself to be better focused, less concerned and more able to follow other great comics.

Admittedly, these hot sets at open mics probably won’t be the level of comedy you face at a contest or showcase. But, the opportunities are right there week in and week out and you can use them to your advantage. So, just ask the emcee at the open mic if you can be “on deck” to follow a blazing hot set.

IT STARTS BY MAKING IT A HABIT

You can go to the same open mic six weeks in a row and see the same people do the same six-minute sets. And, if we are completely honest, most of them aren’t even good sets. The jokes cry out for help. Yet the comic ignores them. How long did you keep your first set before you made changes?

The key is making it a habit to try new approaches. Leave some room for experimenting. Every time you take the stage you should have at least one little experiment that could backfire. You should be a little excited when you get to that part of the show. You should be a little giddy if it works. And if it doesn’t, you should feel good that you tried something different. You purposefully took a chance to improve.

Good luck and I hope these suggestions help!

This blog post is a production of the Rik Roberts School Of Laughs. If you want to learn about becoming a stand-up comedian, or just become a better one – visit the wwwSchoolOfLaughs.com web site.