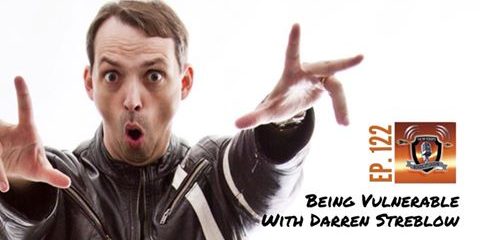 Today I meet up with clean comedian and radio show host Daren Streblow. I’ve known Daren for awhile and he has always been super funny and extremely gracious. Today we talk a lot about the inner mind workings of a stand-up comedian. And we talk in depth about being vulnerable onstage.

Specifically we talk about:

Daren headlines churches, fundraisers, corporate functions, and colleges all over North America. He’s a “humor opportunist” who is always looking for the comical side of life and how people live it. He takes topics that everyone can relate to and filters them through his unique lens where connecting A to B leads to a letter in the Greek alphabet or maybe salad dressing.

With an offbeat style that has earned him the title “The King of Uncool,” Daren’s demeanor carries an audience along at an easy pace, and often take people by surprise with the intensity of their own laughter. He works hard to craft his humor in well-oiled routines that works magic with the audience and creates a solid connection with them, often catering to their specific age, profession, or background. Added to his love for stories, comical facial-expression, and wild antics, you have a presentation that is both sophisticated and wacky, whimsical and thoughtful, and just plain fun to behold.

Born in Ely, Minnesota, Daren grew up with a robust imagination. He loved superheroes, which often got him into trouble. He would pin a large “S” on his chest, wrap a dish-towel around his neck, and jump into moving traffic to stop the villainous drivers. Fortunately for him, it always worked. He also found amusement in shooting arrows at neighbor’s houses and occasionally lighting campfires in their basements. He confesses that his mother “wasn’t at her emotional best during those years.”

Daren is often asked if he was the class clown in school. “Not really” he says. “I had a sense of humor, but it was pretty raw and unrefined. So when I cracked jokes in class most of my classmates thought I was being serious and wrote me off as a space alien.” Daren’s humor did occasionally cause his teachers to laugh out loud. “But making the teacher laugh didn’t score a lot of points with my peers.”

Daren’s mother saw that he needed a creative outlet and encouraged him to take a part-time job at KDNW radio in Duluth, Minnesota. “I was 16 and had this super-deep voice that made listeners think I was 40. So they thought it was weird when I was telling them little stories about something funny that happened in algebra class.”

He earned a degree in communications from University of Minnesota, Duluth. At the time, Daren believed he was pursuing a lifelong career in radio, but a strange event changed his direction. Out of the blue, a still small voice told him to be a comedian. Weird. However, Daren says he will tell you all the details if you ask him and he insists there were no drugs involved.

Early in his comedy career, Daren met comedian Brad Stine who became an instrumental influence on the young performer’s development. Brad encouraged Daren to get involved in open-mic nights at comedy clubs. For 4 years Daren drove 2 1/2 hours to Acme Comedy Company in Minneapolis, Minnesota, performed a 3 to 7 minute set, and drove back home. He says those years were his comedy education and if you can learn to make people laugh with clean comedy in an open-mic environment, it will work anywhere.

Daren Streblow enjoys the challenge and creativity that comes with being a clean comedian. Especially being vulnerable onstage. He performs around the United States and around the world in clubs, colleges, corporations, and even churches.

In 2011, Daren was given the opportunity to bring his comedy back to the airwaves. Media Outfitters Inc., teamed up with Daren and launched the syndicated “Daren Streblow Comedy Show” providing a weekly dose of classy comedy to the United States and overseas. The show can be heard in over 70 markets — a number that continues to grow at a rapid pace.