Do That New Joke Already! 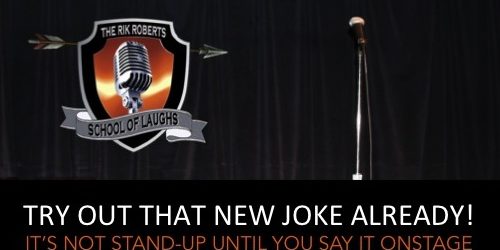 How many jokes have you written but not got around to performing? Be honest. Is it more than you would like to admit? What are you waiting for?

You can’t make something better until you make it first. In other words, the new and improved version will always be on hold until you say the original version of the joke on stage. It isn’t stand-up comedy until you say it onstage.

It’s time you violently executed some of these new jokes. Give the joke a chance and see how the crowd responds. Yes, you should take some time to write jokes and do the best you can at getting it down to the tightest, best version you can. But, don’t wait for perfection.

In business, there is a term called “Minimum Viable Product” or M.V.P. This is simply the beta version of a product. It’s used to test the interest from potential buyers, resellers, investors, etc.,

Think about downloading a new app. The first version gives you a feel for the concept behind the app. It should also solve a problem or give you a new or better way of doing something. If enough of those original apps are sold or downloaded, the manufacturer then relies on feedback and criticism from those who downloaded it to make it better.

What the developer didn’t do is create an app with 37 functions and then test it out. They got it out and got feedback.

I want you to start thinking about all of your jokes this same way.

Create a premise, punch line and maybe a tag line that you can “sell” onstage. Listen to the feedback from the audience. Did they “buy it” with their laughter? If so, you’ve got a M.V.P. joke. Was there any point where you may have lost them for a moment? Did you hear a groan somewhere? Did the audience repeat back a word or phrase you said? These are all clues for where you can take the joke next.

As comedians, we can get too wrapped up in worrying that the audience (or other comics) will think you are “unfunny” if a new joke fails. The reality is comics and audiences will think you are horrible if you always go up and perform the same, exact routine.

YOU CAN’T BE A “PRO” WITHOUT A “PROCESS”

Failure en route to success is called “the process”. You must learn to love (and look forward to) the process! When a joke fails, you suddenly have a reason to get up and write in the morning. Figure out a new way to say it. Apply different techniques to punch it up. Tighten up the premise. There are a million ways to make a joke better. But if you don’t say it out loud, you’ll never know what needs to be fixed.

Every successful comedian I know is part scientist, linguist and artist. They love new jokes. They embrace and thrive on getting things out in the open and then under the microscope. They spend their days and nights dissecting, deconstructing, and retesting different concepts and ideas to find the comedic answers to our daily problems. These trailblazing comics realize the process is part of the art. They work equally hard both onstage and off on all aspects of joke writing.

You may discover that you love the process more than the performance. That is GREAT. You could be destined to be a writer and not a performer. The world needs great writers. Successful comedians often hire writers to help them develop their material. Late night talk shows, radio morning shows, web sites and speakers all hire writers. Writing for TV or RADIO should not be looked up on as a “consolation prize”. It’s honorable work.

Here’s another benefit of giving the joke a chance on stage: other comics may help you! There is a stereotype that all comics are self-centered and afraid of competition. That is often true of new, or insecure comics. However, a more experienced comedian will often times come up to you after a show and offer some insight.

“It was a little wordy, try saying it this way.”

“You stumbled on the set-up, that’s why it didn’t work. The audience didn’t understand what you said.”

“It’s funny, but you didn’t give the audience time to laugh.”

These are all statements that have been given to me by people who would have never been able to help if I hadn’t said the joke on stage. In fact, I would have given up on many jokes the very first time if I had not have been given some constructive criticism.

Beyond simple feedback, there is the potential for some extremely useful input from others. I guarantee if you are approaching comedy the right way, at some point early on a respected headliner will walk up to you after the show and say these magic words,

If you are newer to comedy, a tag line is a line after your punch line gets a laugh without any additional set-up. More laughs without any down time! I love tag lines.

When a seasoned pro gives you a tag line it is like magic. They could have kept it to themselves and made it disappear. Instead, they gave you the rabbit to pull out of the hat.

In fact, a tag line from another comic is often a huge laugh because:

A) You would have never thought of the line from your point of view (P.O.V.).
B) Because it isn’t from your P.O.V. it’s even funnier that you said it.
C) If you didn’t see it coming, chances are the audience will be twice as surprised.

Be sure you watch other comedians onstage. Be generous with your offers of tag lines and feedback. Also, be aware that some comics don’t want any “help” and may brush you aside. No worries, everybody does it their own way.

YOU CAN NOT IMPROVE WHAT YOU DO NOT MEASURE

Another huge benefit of getting a joke “off of the page” and “onto the stage” is measurability. Assuming you recorded your set, once you’ve told the joke in front of a crowd, you will be able to play it back and see how long it is and how many laughs you got. By dividing “A” by “B” you can determine your joke’s laughs per minute.

You should look at all of your jokes and see those key factors. Knowing these stats, you will be able to assemble sets with much more ease. If you are asked to do a five-minute set, you can scan through your material and pick out (5) one-minute jokes, or (10) thirty- second jokes, a combination of the above, etc.,

You should also be able to look at the total laughs you can expect from that material. Knowing that, you can compare multiple sets and pick the one that suits the occasion the best.

It’s amazing to me how many comics don’t take the time to know how long their jokes actually are. If you don’t know, you will be constantly inconsistent.

Hopefully, this has inspired you to dig up some of the jokes you have yet to tell. Knock the dust off of them and brush them up one last time. Before you hit the stage for your next show, here is what I want you to do…

1. Write out your next set list and include at least three new jokes.
2. Record the set.
3. Listen back and jot down how long the joke took to tell
4. Write down how many laughs you got
5. Be open to (or request) feedback from other comics
6. Revisit the new joke and see where you can tweak it
7. Try it again the next time out, and until you get it to where it always works
8. Repeat steps 1-7

I hope you enjoy the process as you violently execute this plan today!

This blog post is a production of the Rik Roberts School Of Laughs. If you want to learn about becoming a stand-up comedian, or just become a better one – visit the wwwSchoolOfLaughs.com web site.