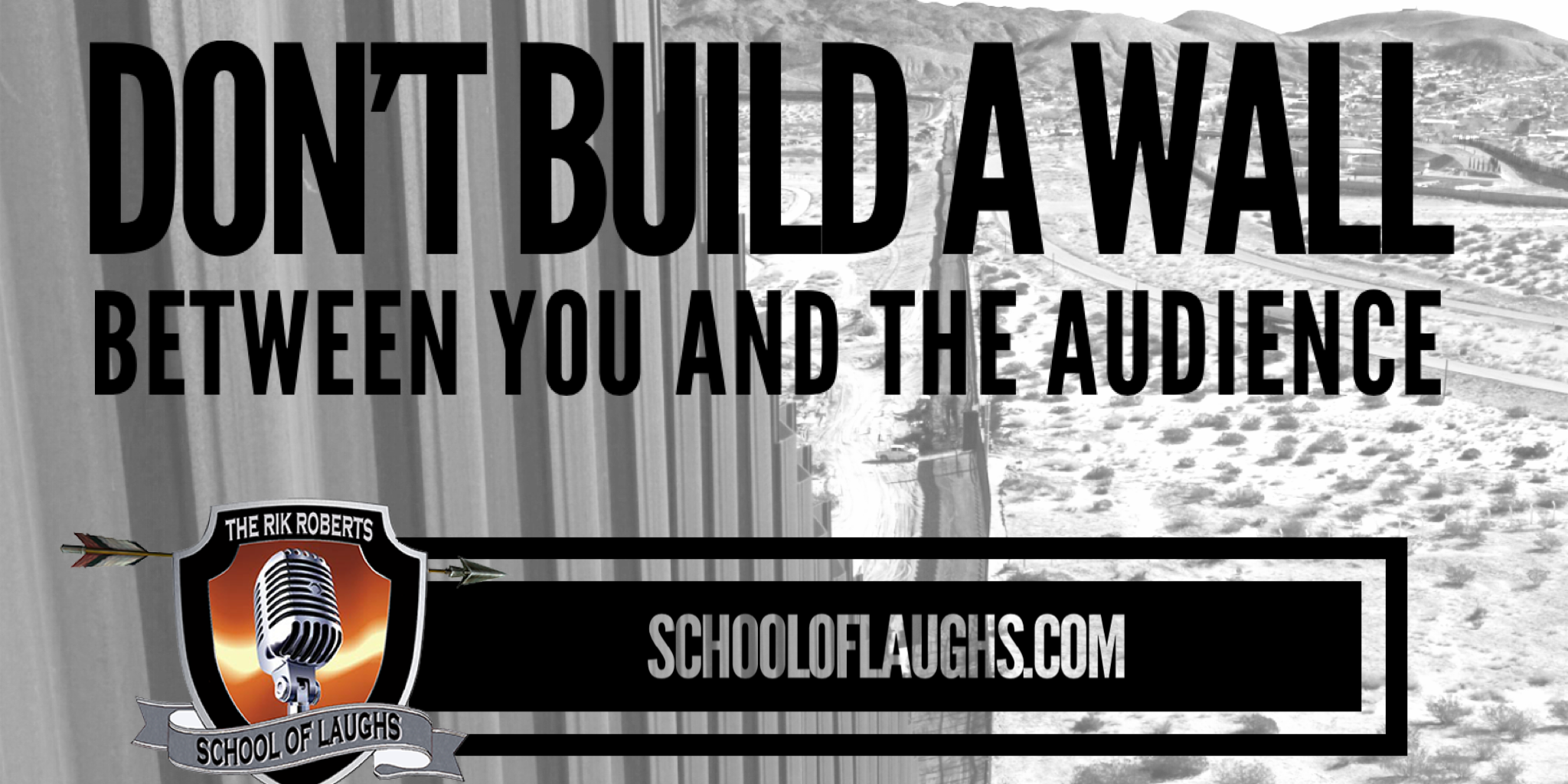 Here are 3 things you should avoid if you want your jokes to be “borderless”.

DON’T BUILD THE WALL … between you and the audience. There is a lot of talk about the proposed increased security around the US and Mexico border.  It got me to thinking. When you go onstage, are you building a “wall” between you and the audience? You want them to laugh. You need them to engage. So why do comedians do things that can sometimes alienate their audience?

1. Assuming the audience knows everything you do about your topics.

2. Insulting the audience when they don’t get a punchline.

Sometimes you lose the audience because you never took the time to know who they are. I once worked with a comic who made the first mistake, “assuming the audience knows everything you do”. He would berate them for not being smart enough to get the punchline. He would stare them down and say, “People who read love me”. This always divided the room. It made him look arrogant and judgmental. He was a brilliant comic with good jokes. But, he wasn’t giving them enough info on the front end to get the punchline.
When an audience stares back at you after you deliver a punchline it means they didn’t connect. There is no reason to scream and holler at them. This would be like you mumbling to a new acquaintance, “Hello, um my name is … [inaudible] and I’m here to [inaudible]. Then when they don’t reply you scream at them, “What are you an idiot?? I said hello! Are you deaf????”
No, you weren’t clear and understandable.
When you get the blank stare or silent treatment from the audience, look inward. Ask yourself, “Okay, how can I make this easier to understand?” Instead of calling them stupid, think of them as uniformed. Then, fill them in.
Don’t insult the audience. The club spent time and money to get them there. The wait staff depends on their tips. There are other comics on the show. If you belittle the audience it doesn’t set the other comedians up very well.
LESSON: Treat the audience like guests. Be a better “host”. Serve them jokes they can digest.

3. Picking the wrong jokes for the room.

Your job is to pick the best set of jokes from your arsenal for the audience on the other side of the microphone. Difficult? It can be when you are new to comedy. If you only have ten minutes of jokes you will have to do those jokes EVERY TIME you get onstage. You will be getting on every stage possible and sometimes the crowd won’t be your Ultimate Audience. Be patient and write a set of jokes that are universal and about YOU. This will allow the audience connect.
With experience, you should be able to identify who you are in front of and what jokes work best with them. You will need to sacrifice some of your favorite material because the joke doesn’t fit the room. That could mean forgoing a “dirty” joke in a clean room. Or skipping confrontational political material when you are emceeing an event.
You can still be a comic who is edgy, opinionated and operate outside of the mainstream. Choose material that brings the audience into your way of thinking. Write jokes that identify their opposing view. Acknowledge that your opinion is just that, your opinion. It’s not law and your aren’t 100% right. But you are 100% you.
Note: Over time you will discover that you aren’t a great fit for some comedy rooms. Nothing you can do will change the situation. No reason to spend energy banging your head against a wall and expecting anything to change. Move on.
LESSON: Doing the act you love to do may not always be the best fit for the room. It is a delicate dance. There will be missteps along the way. If you are thoughtful when you put together a set the results will be worth the effort.
TAKEAWAY:
Comedy at its best can be informative, inclusive, thought provoking – and even unifying. Audiences are hard to find and deserve a little respect. They chose to come out to a show to laugh and have a good time.
Do your best to avoid “building a wall” between you and them. Establish common ground, build trust and then take them on a ride. If you do it right, they will be more than happy to come back and see you again and again. After all, isn’t that the goal?

– Rik Roberts is a full-time comedian based out of Nashville, TN. His comedy tips and podcasts can be found at www.SchoolOfLaughs.com.