As a comedian, entertainer, or speaker your business is directly tied to how much quality content you develop, perfect and deliver. Are you ready for some creative goal setting? Setting aside time to hone your craft is absolutely imperative to your success. But it doesn’t happen automatically. As the new year begins, take some time to lay out a plan for becoming undeniably funny.

There are a lot of goals you can set. They are different for every single one of us. But I wanted to isolate a few that I think are non-negotiable. Especially if you are serious about getting more gigs, making more money and having a bigger impact.

There is no way around it. If you want better shows, gigs and laughs you have to commit time to writing. Period. Why would you expect to see a difference in 2017 if you don’t write? Sure, marketing and promoting yourself is part of the mix. But if the marketing isn’t working now there is a good chance the product is the problem. Your products are the jokes. Produce!

A 4k resolution video of a bad joke only allows people to clearly see that you weren’t funny.

A million mediocre Facebook posts won’t help anything. What is your time on Facebook versus time spent writing ratio like? Be honest. Instead of checking FB 20 times a day, schedule your posts in advance. Let your great ideas work for you instead of against you. If you like the idea of automating part of your day check out SocialJukeBox.com, it’s the one I like.

So, if it’s not Facebook, what is robbing you of time writing? TV? Sports, soaps, shows and movies all claim hours at a time. Don’t let them do it in the new year. Writing first, hobbies and distractions later.

Feel free to shoot me an email to schooloflaughs@gmail.com for a free “Goals Tracker Checklist”. It includes over 50 different areas you can target for improvement. The next two episodes will go over these goals and offer some ideas and guidance on which ones might be most important to you. 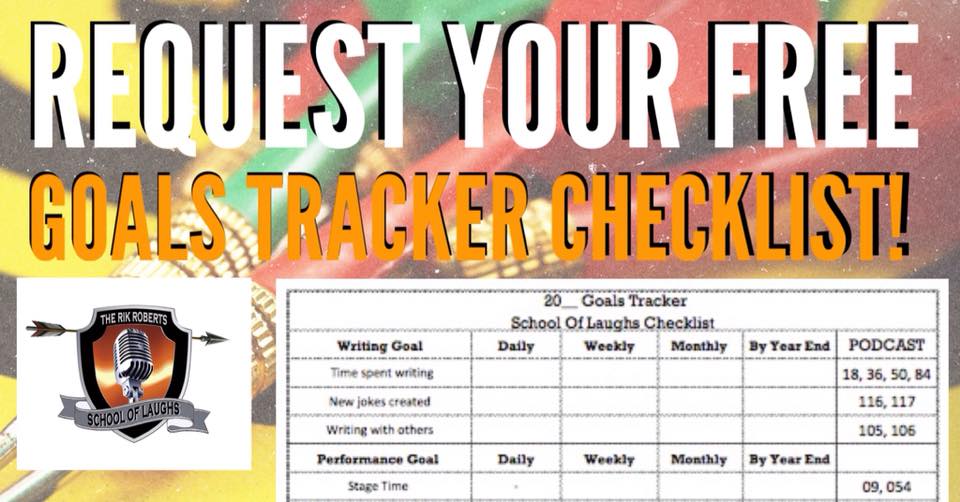 You have to take that material to the stage. Try out that new joke already! You can’t just write, and hope the comedy comes out right at the gig. It won’t. You have to bring pieces to life one by one at open mics. Get those jokes in front of an honest audience. Eventually, you’ll command the stage in front of your ideal audience.

Treat it like an experiment. Worry less that it won’t get a laugh, and worry more that it will never get out of your notebook. You can always fix what is broken.

The best joke still sitting in your notebook is no better than your worst joke in your act.

I used to be really hung up on “killing” every show. Even the open mics. That really held me back. I was constrained to doing the same jokes over and over. Why? Partly because as a teacher of comedy, I wanted to show my students that I had it all together. And to show potential students that they were learning from a “pro”. Every open mic in town there were at least 3 former students on the show. Many of the shows in Nashville are run by former students. I felt obligated to bring my “A” set every time. I had set my own trap.

A few years ago I made peace with it. I decided to challenge myself to write more and get it out of the notebook and onto stage faster. As a performer, I wanted to S.T.R.E.T.C.H. myself. A new joke idea had a “release date” in my mind. Once I have the idea I have to try it out onstage within 14 days. If not, I lose. I even created a comedy scorecard to help me stay accountable to myself. Creative goal setting has helped me generate more material.

Need some ideas on writing? Check out one of our LIVE COMEDY WRITING session episodes.

Now, I LOVE trying more material out every month. A student told me after a recent show it “was cool to see you experiment and fail. It made it real for me.”

It was like a weight lifted off both of us. I realized that I don’t have to be perfect onstage. And I discovered THE PROCESS of developing comedy is more interesting and fun than trying to nail every show with my greatest hits (even when it was an unpaid open mic).

As a result of trying more ideas, more often, my jokes got better. And because I had more time with my material before the big shows, the shows got better.

So, my challenge to you is to get more practice time onstage. Anywhere you can. Start your own show if you have to.

Whatever you do, don’t let a month go by without trying something new. Just don’t. True comedic growth isn’t realistic if you aren’t in front of crowds working on your craft.

You can’t improve what you don’t measure. In 2017, make sure you are staying on top of your writing and performing goals. Set a daily alarm on your cell phone to remind you to pick up the pencil (and then turn the phone off until you’ve written a page or two).

Set a monthly reminder in your calendar to check your progress.

Document your writing by picking up 12 colorful spiral notebooks at the store. Label each one with the name of a month. Then fill it up! How great would it be to look at that stack at the end of the year and count 16 or more notebooks??? There really is no reason why you can’t do it.

On the front of that notebook make a big old check mark every time you get on stage. If it is a paid gig (or a “real gig” that you volunteered to do for free), circle that checkmark.

As the months go by lay out those notebooks and see immediately if you are getting onstage more or less. Check it at least once a quarter. Don’t let yourself “trend downward”.

WHAT NOT TO DO

Part of setting goals is deciding what NOT TO DO ANYMORE. Is comedy going in the right direction for you? Have you noticed real improvement? Has the hobby gone on for more than a few years without really providing any positive results? I think by setting these goals and achieving them you will undoubtedly see improvement. But if you do all this work and nothing changes … maybe it is time to consider moving on to something else.  If so, then set a goal of when to “make it or let it go”.

Do yourself a favor and be accountable. Let someone else know you are setting these goals and then have them check in with you. Even better – pick a fellow comic.

Again, if you are for some creative goal setting and want to track the goals in 2017, please email me at schooloflaughs@gmail.com and ask for the “GOALS TRACKER CHECKLIST”.

Here’s to a year full of success and improvement – however that looks for you.