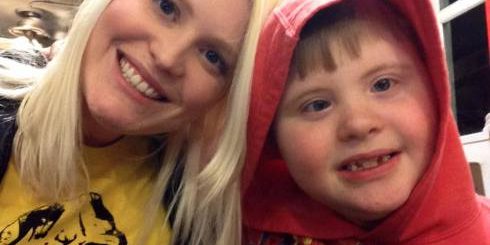 (Pictured: Author of this post Paulina Combow and Cam after his first open mic)

I’m a comedian. I’m also the oldest sister to a 9-year-old boy with Down syndrome. In comedy, we talk about our lives. We have a platform, no matter how tiny, to use as we please. You can use it to talk about your genitalia, rant about things you hate about the world, or share your hilariously keen observations.

One observation I had was how strange it was that my little brother was invited to cut to the front of a line of hundreds of families to see Santa Clause one Christmas season. His legs work, he’s capable of waiting, but still one of the elves recognized his disability and escorted us directly to the jolly old man’s lap. We didn’t say no. I did a couple of jokes about how strangers feel sorry for my brother and give him special treatment, so we just started taking advantage of it. I wasn’t always sure how it would be received.

I put disabilities in the category of possibly offensive right in there with race, religion and politics. I worked on the jokes, rewrote them, and retold them over and over again in front of different audiences until I felt my position was clear: people with disabilities may have “special needs,” but they’re also just people. I wanted people to relate to my brother and how we find the positive in situations. Unfortunately, not all people see it that way.

My biggest concern was that I was exploiting my brother for comedy. Isn’t this his story? Why should I get laughs from it? But it’s not just his story, it’s mine too. He’s a big part of my life, and a life is made up of experiences, and experiences are how we tell our story. I have the power, albeit a small power, to take our shared experiences and tell our story.

When you do stand-up, you get asked a lot of weird questions, the most common being “what is your stand-up about?” I’ve never been sure how to answer that, and any attempt sounds like a little kid describing how airplanes work. Since making these jokes into bits and telling them to various audiences, I’ve been getting feedback from people. Mostly people who also have a child or sibling with disabilities who understand what I’m talking about. Now that I have them on my side I feel a lot better about it, but I mostly want people who don’t know anyone with disabilities to also be in on the joke.

I could possibly affect real change here. Small examples like how people feel sorry for my brother so they will put his shoes on and tie them. True, you can probably get them on faster than he can, and he’ll be more than happy to let you do it for him. But he also needs to know how to put them on, and to know the feeling of independence when he does it himself.

I was talking to a man whose daughter has Autism and he told when they’re out to eat, his daughter will ask for dessert, and even after he tells her no, the person working there might bring her dessert anyway, on the house! They think they’re doing a nice thing by giving a disabled person a cookie. It makes them happy. But what you’re really doing is going against the healthy eating habits and restraint their parents are trying to instill in them for when they’re not around to tell them no.

My little brother was five when I started comedy. It was a sensitive time for my family because he was going to public school for the first time and being incorporated with “normal” kids. We were concerned he would be picked on and not be able to tell us. About once I week I had to talk my mom out of homeschooling him. There were instances of kids picking on him, but more often it would be Cameron who was the aggressor. He didn’t know how to express himself, or wasn’t being understood, so he got his point across by pushing or shoving someone. That’s when I came up with the story “Super Cameron,” and have been reading it to Cam’s homeroom the first week of each new school year. It’s from the perspective of a “normal” child wondering why the kid in their class is different. I read the story and then let the kids ask whatever they want, and I answer as honestly as I can. It’s seemed to help them understand what Down syndrome means and that he can be treated like a normal kid, not a fragile porcelain figurine.

Kids aren’t the only ones who can be bullies, or say hurtful things though. I’ve also had to grow a tough skin in comedy. Obviously we don’t use or condone the “R” word in my family. It’s not like I never said it. I was just as guilty as anyone until it affected me, and I understood what it felt like to have someone I love labeled the “R” word. But in comedy, anything goes. I would go to open mics and have to hear people throw around the word retarded, or hear the punchline of a joke be how someone looked like they have Down syndrome. We all know the short bus jokes or the comparison, “that’s like being the smartest kid with Down syndrome.” It totally pissed me off. I was offended. How dare they say that in my presence?

Then a wiser comedian told me I’d have to get over it, so eventually I did. You can’t be offended by just the things that affect you and not everything else. You can’t pick and choose what’s off limits and what’s okay. It’s the same as how a racial joke may not offend me because I’m white, but a sexist joke would piss me off because I’m a woman. It’s all or nothing, baby. If the jokes not funny, eventually that comic will dump it (unless they suck), and if it is funny, then maybe you should learn to laugh at it too.

I’ve even heard of a fellow comedian saying I’m “not funny”, and I “have to use my retard brother to get attention.” Of course it makes me sad, and hope my brother never has to hear words like that. But more than that, I understand it comes from insecurity…or maybe just ignorance. I also understand I won’t be able to change everyone’s minds, but each one I do is a win.

For now, I’m still working on making disabilities funny, and being an advocate for those with disabilities. There are comedians who have disabilities too, and they do a kick ass job. I’ve even started bringing my little brother to family friendly open mics and signing him up. He’s been treated like such a celebrity his whole life, that he feels right at home onstage. Maybe the day will come where he can articulate it himself and I’ll have to go back to jokes about food (my biggest weakness). He’s already done a great job in nine years of showing people how much a person with Down syndrome can do and accomplish. We have a more active social life than most people and like to show it off on Instagram. Until then, I’m happy to tell people what my comedy is about. It’s about my brother and me going through the world like we own the place, taking the good with the bad, and having a killer story to tell at the end of the day.

What’s your stand-up about?

Find out ore about Paulina on her site: http://paulinacombow.com or on twitter: https://twitter.com/paulinagc