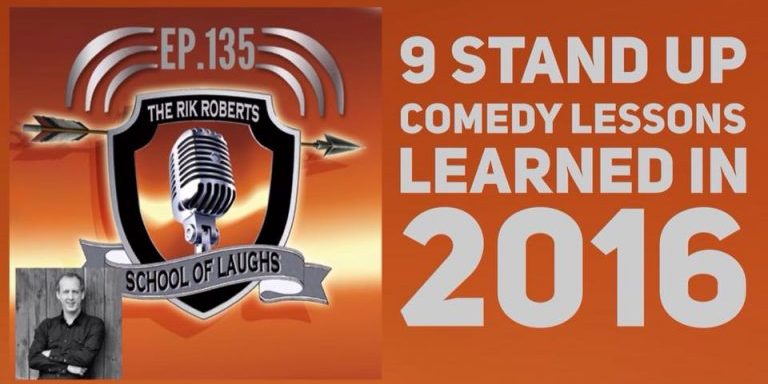 This week’s episode “9 stand up comedy lessons learned in 2016” is brought to you by Patreon supporter Kay Dodd Stokes. To learn how you can support podcast through a small, monthly donation, visit Patreon.com/SchoolOfLaughs

As we look back at 2016 for the final time, I wanted to make sure I admitted some mistakes, misconception and missteps. We can all learn from a mistake. If you don’t, then that mistake becomes a habit and you will soon commit it again. You can (and will) make mistakes at every level of the comedy business.

To give some extra depth to the topic, I brought in two former students who are now full time to see what they learned as well. Jonnie W. and Brian Bates each share some hard earned stand up comedy lessons from the past year. Jonnie is a fixture in the Christian comedy world. Brian is also in that field but spends a majority of his time in the comedy club scene. I am fairly entrenched in corporate comedy.

So, the perspectives come from three comedians in three different markets. And also from a single fellow, a married fellow, and a fellow married with two kids.

We cover 3 lessons each in this episode. Specifically we talk about:

and a whole lot more.

CLUB 52 IS THE ONLY WEEKLY PROGRAM