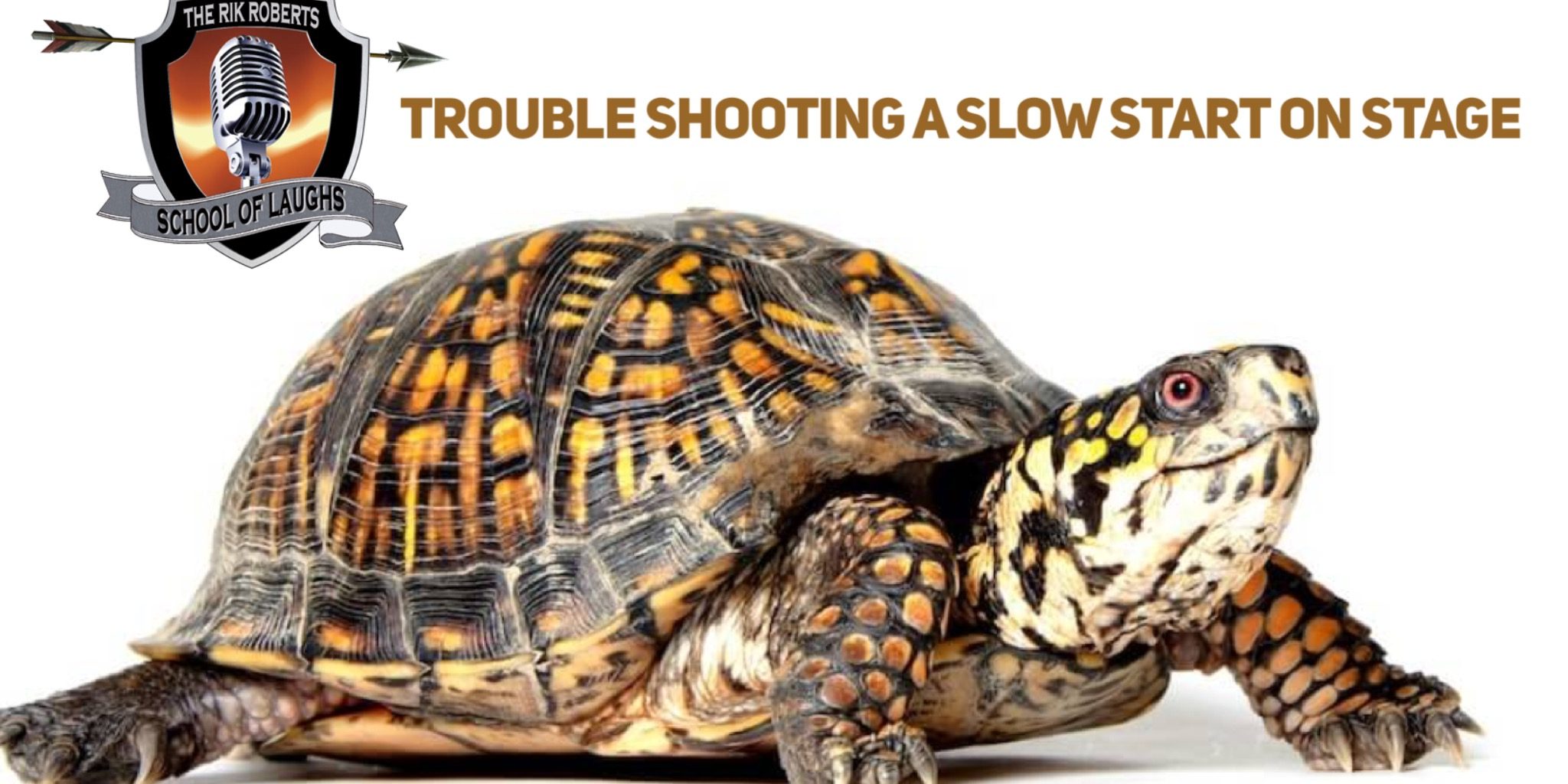 At some point, every new comedian will have a show that just gets off to a sluggish start. The laughs aren’t coming, the crowd looks confused, and something seems amiss. The comedian can blame the crowd, shrug it off and forget about it.

Or, if the set was recorded, they can learn from it.

Have you had one of those shows?

Here are a few things to consider when troubleshooting a slow start onstage.

The first thing to listen for is to see if the emcee introduced you properly. It is your responsibility to hand the emcee a short and easy to memorize introduction. If the host rambled on, made up credits that you didn’t have, or commented negatively on what they thought of you – you were sandbagged.

Also listen to see if the host failed to get the attention of the audience before you hit the stage. It is their duty to gain command of the room before bringing you on.

If any of this was the case, their lack of professionalism may have affected your first couple minutes.

Solution: Talk with the host

Some comics really could care less how they bring you onstage. They are simply trying to be funnier than everyone else and will do whatever it takes to get a laugh. As a result, they can diminish the value of the comics with them on the show.

Next time you perform with that emcee, have a short conversation with them. In a friendly but firm manner, let them know that you would like the intro to be delivered as close as possible to what you gave them. Thank them in advance for being professional. Maybe the power of suggestion will kick in and you can hit the stage properly next time. The emcee has a tremendous responsibility and should take the job seriously.

Ask yourself “was my opening joke delivered correctly?” Did I take command of the stage and open with a well-crafted (and easy to understand) joke? If you meandered around, needed input from the audience or created any kind of distraction, it’s your fault.

Solution: Make it easy on both you and the crowd

Too many times I see comics starting their sets with a question instead of making a statement. You are there to perform FOR the audience. Not to ASK them for help. So, establish that you are in control with a killer opening line.

Problem: You were off your pace

From time to time, you may hit the stage and feel rushed. Especially if the comedian before you was really killing, you might be tempted to step out of your normal pace and try to match their energy.

This rarely helps. Your proven jokes work because you have developed your timing and delivery and recreated that in subsequent sets. When you deliver them with different timing they become out of synch.

Solution: Always be yourself

Instead of trying to match the fiery pace of the previous comedian, dial it back to your normal delivery and be confident in your material.

Problem: You were too similar to the previous act

We all like to think of ourselves as unique and original. We should indeed strive for that onstage. But the reality is, sometimes we get onstage after someone else who may have a similar look, similar topics, nearly identical delivery or style.

How many times have you gone to an open mic and watched ten middle age white guys all complaining about the same things? More often that you should, that’s for sure.

Solution One: Be different

Easier said than done, but a truly funny, original act can follow ANYONE on stage.

Next time, suggest to the host that the line-up be constructed in such a way that each act looks and sounds different than the one before them. In between each of those middle age white dudes, add some flavor and variety.

If you don’t want to follow people who are similar to you, go up first. Ask the host to move you to the front of the line up if at all possible. Most all comics try to get in the middle of the show where it is safe (the crowd should be warmed up but not worn out in the middle of the show). Forget playing it safe, get used to warming up a cold crowd. It will pay huge dividends later.

There are certainly a lot more reasons your set can get off to a sluggish start. But hopefully, you take responsibility for your show and don’t always blame the crowd. What other questions do you while troubleshooting a slow start onstage?

As always, I welcome your answers and suggestions in the Facebook groups or via email.

If you feel your writing is holding you back, please consider enrolling in the online writing class. Overcoming slow starts and getting stage time won’t help one bit if you aren’t creating solid material. For more info on that click here.